Get Motivated by the 15 Best Sporting Photos of 2016 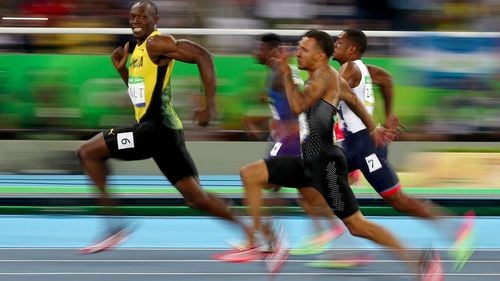 As he easily breezes ahead of a group of runners desperate to catch up with him, Usain Bolt turns and seems to flash a cheeky grin at the camera.

The photo, taken in August at the 2016 Olympics in Rio de Janeiro, quickly became the most recognized sporting photo of the year. Here are a few more pictures that are sure to motivate you.

Usain Bolt of Jamaica competes in the Men’s 100 meter semifinal on Day 9 of the Rio 2016 Olympic Games at the Olympic Stadium on August 14, 2016 in Rio de Janeiro, Brazil.

Kaitlyn Harrell of the USA competes during the Subaru Australian Mogul Championships on August 30, 2016 in Perisher, Australia.

Sam Switkowski of Box Hill competes for the ball covered in mud during the round 14 VFL match between Box Hill and Williamstown at City Oval on July 9, 2016 in Melbourne, Australia.

Angie Sabrina Gonzalez of Venezuela competes during the Women’s Omnium Flying Lap 5\6 race on Day 11 of the Rio 2016 Olympic Games at the Rio Olympic Velodrome on August 16, 2016 in Rio de Janeiro, Brazil.